My Unplanned Wedding: Part One

The charming 1991 film, “Father of the Bride,”  first introduced me to the concept of the Professional Event Planner:

“Franck Eggelhoffer” [pronounced “FRAHNK”] [Martin Short] and “Howard Weinstein” [B. D. Wong] were the stylish Coordinators for the Wedding Ceremony and Reception: 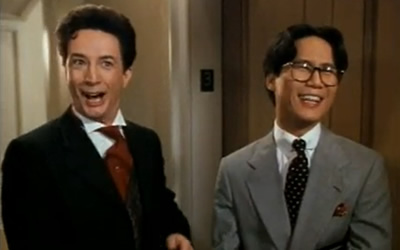 Even the trendy “Franck” might not have predicted the news that, twenty years later, Event Planners will stage your Engagement!

This new development in “staging” prompted me to remember August 1, 1973:  That was the day when My Future Professor and I became engaged, without the benefit of a Consultant!

We were each living and working in Tallahassee for the summer.  In the Fall, I planned to complete my Senior year at The Florida State University  and he planned to return to The University of California at Berkeley, to complete his Senior year.   We were young [21] and had never dated anyone else, since our high school days in California.

He had some doubts about his program:  He said, “It seemed as if every other student in my UCB Electrical Engineering courses had already taken the class!  I have to compete with those students for a job!”

There was one thing about which he had no doubt:  He had predicted, when we were both 18:  “Someday we will be married”  and his resolve had never wavered.

I was not too keen on the commitment of marriage.  I had, sadly, observed only a handful of happy marriages in my lifetime.  However, my sister was married in 1970 and she and her husband seemed happy.   Besides, I could not imagine spending the rest of my life with anyone else besides my high school sweetheart.

We spent an enjoyable summer, in 1973, working and playing tennis together.  Soon, he would return to California, where 3,000 miles would separate us, once again.

The moment that would change our lives forever occurred in the most mundane of venues:  Morrison’s Cafeteria, at the Tallahassee Mall.  Sadly, the cafeteria has since disappeared:

As we waited in the line, I was thinking about having the “Liver and Onions.”

It was at that moment that he turned to me and said, “Well, I guess I could stay here and finish a degree at FSU and we could be married.”

And that was it.  Un-staged, un-planned: no romantic setting;  no garden nook or ocean sunset; no candles, wine, flowers, or love poems — not even a ring!

And no observers or participants, unless you count the folks in line at the Cafeteria.

Just supper at Morrison’s Cafeteria, where we sat down and began to plan our wedding.

For reasons I cannot now remember, we decided that Sunday, September 2, 1973 would be our wedding day.  We had just thirty brief days to plan it . . .