The Heroes Among Us: Fourth in a Series 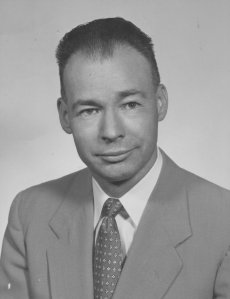 Bill, a Quaker leader and pacifist, qualified for Conscientious Objector [CO] status during WWII and was assigned to the Civilian Public Service [CPS].  This was a four-year duty, which paid room and board but no salary.  [Among other CPS projects, Bill worked on the Blue Ridge Parkway and the Inyo National Forest, CA.]

After WWII, Bill earned a Master’s of Divinity Degree from Duke University, with a major in Church History.  Later, he earned a Master’s Degree in Education from UNC-Chapel Hill.  His primary vocation was that of a public secondary school educator, in History.

Bill married late in life, at age 48, to Lois Levering, 26, who had two small children from a previous marriage.  Bill adopted Teresa and Michael, lovingly raised them, and sent them both to college.  To this day, they both refer to him as “Daddy.”  Bill also invested decades of “fatherly” wisdom, guidance, counsel, and help to his niece and her three sons.  He and Lois had one biological child, a son, Sammy.  This beloved child died from leukemia in 1975, at the age of eight.

Bill retired from education, after almost 30 years, but he never retired from serving others.  He became an active community volunteer social worker, providing transportation for clients to medical and dental appointments, regularly traversing several counties in NC.

After Lois died, at age 51, in 1991, Bill never remarried.  Even after suffering this second major loss, he continued to engage in life and to invest in relationships. He regularly traveled to visit the families of Teresa and Michael and to college and family reunions.  He stayed mentally fit by reading and, in his late 70’s, he began a study of conversational Spanish.  Always an avid gardener, he also pursued physical fitness with swim lessons in his late 70’s and, until age 90, he enjoyed twice-weekly square dancing and monthly contra dancing!

At family reunions, over the decades, Bill relished the opportunity to show us photographs of his extensive travels in the U. S. and abroad. We endlessly teased him about his tendency to provide lengthy and detailed commentary.  [We urged him: “Break it down, Bill.“]  After his death, [at age 91] I read his memoirs and discovered anew his remarkable character and virtue.  His children, grandchildren, nieces, and nephews remember him as “high-verbal” but, more importantly, we remember him as a man of intelligence and wisdom, courage and conviction, generosity and kindness, patience and humility.

Uncle Bill, Round Four is dedicated to you!

P. S. Haley’s visit and the Messiah Sing were both glorious!  She is safely back home in TX.  Stephen & I leave tomorrow morning for Gainesville, for Chemo Round Four.

Please pray that the chemo would perform its work of eradicating any errant cancer cells, that I would be spared from debilitating short-term and long-term side effects.

Please also pray for safe travel for Daniel, Haley, and Benjamin, who will travel via car to TLHSE on December 22/23 and will return January 1/2.

8 responses to “The Heroes Among Us: Fourth in a Series”